I decided to fish the Sespe on Veteran's Day, a rare day off for me. Was originally going to the Special Regs section near Tar Creek out of Fillmore, but the fire closure put an end to that. I figured I could go downstream from Lions Camp, further than I had been in the past, and could find some good water. Left early Tuesday morning, and was the only one in the parking area. CLouds were begining to close in, but I figured I had plenty of time- rain was in the forcast for that evening. Took off on the trail, and found that it had been re-routed at the Lions Camp campground. Crossing the creek, the trail was completely dry, and I was worried that even with the recent rains, there was NO water. As I followed the trail downstream, I was releived to see that the creek was still flowing. I walked for about 3 miles, and found a likely pool. As I observed, I could actually see a couple of fish feeding on the surface. What luck! This was going to be good, I told myself. Scrambled down to the pool, and positioned myself for a cast. First cast, the Adams sat on the water for about 5 seconds, then I saw the little torpedo squirt up from underneath. A nice little 7" rainbow.

After landing that one, I spied another, upstream a bit, in a slot between 2 boulders. I moved ever so slowly towards the slot to get a cast off, but he spotted me and moved off upstream. Little did I know at the time it would be the last fish I would see. Packed up my gear and headed downstream for more. Hiked another mile or so, the trail started to dissappear amongst a slope covered in that scrub brush. I followed as best as I could, but scraped and scratched shins was all I had to show for it, so I headed down to the streambed. Scrambling downstream further, I could not locate a suitable patch of water( or any more feeding fish), so after another 1/2 mile or so, I turned around and headed back to the trailhead. Sometimes, when your out by yourself, you come across the strangest things- in this case, a man on horseback and his "pets". 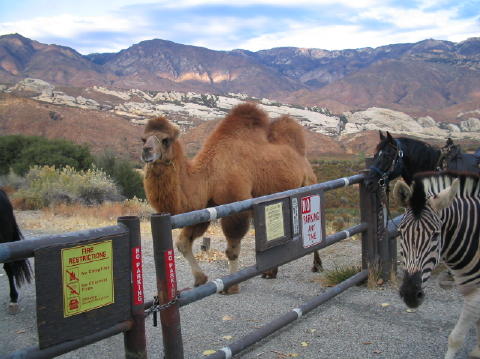 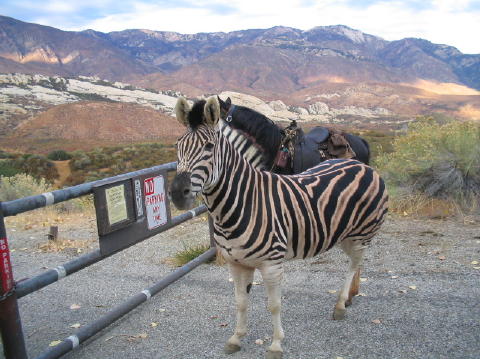 Just out for a walk, leading another horse, the camel and the zebra around. I spoke breifly with the owner. He had raised llamas and had used them for pack animals, and since they were so good at carrying 70lb loads, he figured a camel would be just a bigger version. But he was surprised when the camel was more of a puppy than a pack animal. The camel was 4 years old, and his humps were just starting to touch the top of the trailer(!). I asked him about trailering the animals, and he said he just puts in the horse, and the others follow right along quite willingly. Amazing. Not such a good day for fishing, but the weather and the scenery were magnificent. I hope to get to the Tar Creek section before it closes, fire closure permitting. Matt