The weather in the Kern River Valley was so spectacular on Saturday, that we decided to try and get in an hour or two fishing on Saturday. Deep blue sky, absolutely no wind, and tempertures nearing 80. We decided on Goldledge as it was a spot with easy access, and we hadn't fished near there all year. I didn't hold out much hope, as I figured the water would be relatively high, cold, and off color due to the recent rain/snow. Well, we hit the water at about 1:30, and the river couldn't have been more different: Crystal clear, reasonable flows, and a water temp of 46 degrees. I had decided to fish nymphs, and I lost my only indicator on the first cast. I fished a while high sticking from the shore, but that was un productive. I figured I could use a big foam hopper as an indicator, and then tied on a BH Bird's Nest below. I worked upstream for about a half an hour, not getting any takers. Then I found a spot that would have me salivating if it were the summer of fall- A nice slot riffle below a couple of boulders, spreading out to about 10 feet wide and about 4 feet deep in the center. I fished the edges first then worked into the center. On one cast, I stripped the pair of flies downstream, and saw a dark shape give chase. With ea flip if his tail he made his strike, I was way to quick to respond, and he was gone. I quickly flipped the flies back to the head of the slot, waited for the belly to develop in the line and stripped. Halfway down, he charged, and with a feisty splash, he was hooked, on the foam hopper no less!. I couldn't belive my good fortune, here in the mostly dead December, a nice 12" rainbow hitting a hopper as if it were September. 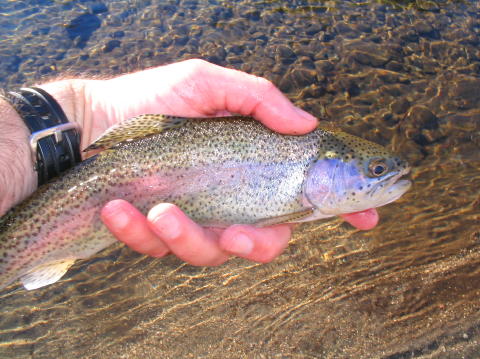 Look closely and you can SEE how clear the river is. Of course, it was the only fish of the outing. And it sure was a bonus considering the how beautiful the weather and river were. It was well worth it just to get outside, and be near the river. There actually a few mayflies fluttering about, and after gettin the one fish on the surface, I clipped the dropper off. No further hits. I also tried a big yellow stonefly and a black woolly bugger to no avail. After about an hour and a half, we decided to call it a day. All told, 1 spectacular December day, and one fish. Not too bad. Matt