After discovering that Sespe Creek was out due to closure of the section we wanted to fish, Gary and I came up with a plan to fish Littlerock Creek, on the north slope of the San Gabriels near Mt Waterman. Gary had a friend who had backpacked into the area several years prior, and had reported catching and seeing "big fish". We were both skeptical, but since the creek eventually flowed into Littlerock Reservoir, we figured that we had a shot at catching something. Upon further investigation, it seems that the DFG had even stocked the creek itself. Details were sketchy, but Gary has an intimate knowledge of the area, and since the rains, I figured the water level would be adequate. We would use our mountain bikes to access the stream about 5 miles below Angeles Crest Highway. We arrived at the trailhead at about 10:30, geared up and headed down the road from the end of the auto access. Past the old Pinyon Pines shooting area, and descending into the canyon, with the desert in the distance. We rode about 20 minutes, down 4.8 miles (and about 1200 ft) to the confluence of the South Fork and main stem of Littlerock Creek. The water was crystal clear, much clearer than I had expected. 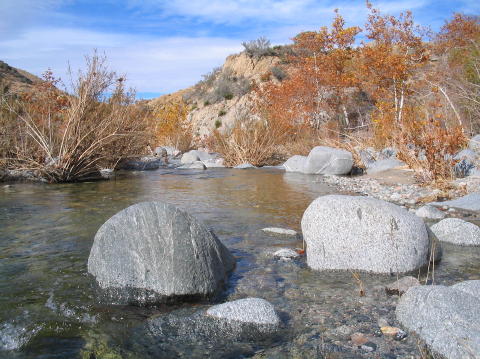 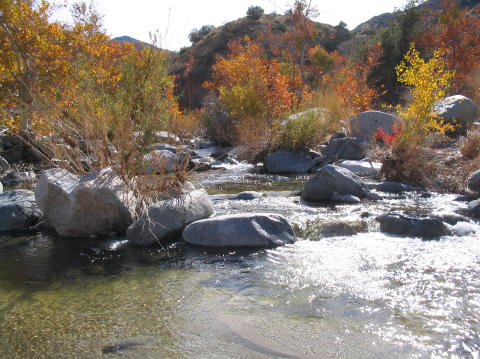 As we stood on a cliff 15 ft above the South Fork, I scanned the pool at our feet for signs of wild trout. Sure enough, after about 5 minutes, I spotted a nice fish, about 9", happily sipping something off the surface. We were pumped to see that there were indeed fish in the creek. Gary headed of to a promising pool and began fishing. I headed off to the spot where I had seen the feeding trout, to see if I could coax a rise.
The fish I was after was tucked in nex to the bank, and I was able to drift a few casts right over him, but he was not interestd. I headed downstream, and caught up with Gary, who had managed to get a fish of about 8-9" on a Caddis. We continued on downstream, fishing the pockets and riffles, without any more success. I hopped across the stream and hit a particularly inviting stretch, but again came up empty. I then climbed atop a large boulder, and flipped a BH Bird's Nest into a nice slot between boulders. Fish On! 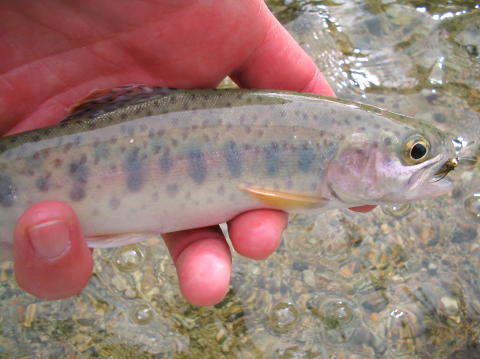 A pretty good fish, about 8", and colored very gray/lt green. Most of the sand and river rock was gray, but I was still surprised how closely the fish matched the rock and sand. We noticed that to the north, over the desert, that the cloud cover was thickening, and we decided we had better get on the bikes for the grind up and out. The ride up was a tortuous 1 hour and 10 minutes, covering 4.8 miles and 1250 feet of elevation gain. Rain began to fall about 15 minutes after we started back up, but was limited to cold, light showers. The dirt road was in good shape, but roughly 15-20 pound daypacks made riding difficult. We had taken enough gear to ride out the night if the need arose, I don't regret taking it along at all. All in all, it seemed like a pretty good find, and the fishing is probably better in the spring/early summer. I think if we downsized our flies into the size 20 range, we might have had more success. I think we will definitely head back in the spring or early summer, and head downstream even further, maybe even spend the night.