We made the annual Labor Day pilgrimage to the river, leaving Thursday night. The plan was to fish the area above the Johnsondale Bridge on Friday, hopefully before the masses descended. We headed out at about 2:30 PM, to hit the afternoon bite. The weather was surprisingly cool at the bridge, upper 70’s, certainly no more than 80. A good breeze of about 10-15 mph blew up canyon. What looked like thunder cells building in to the east. There was only one other car in the lot, we would have the river to ourselves. Karen didn’t want to overtax Reese, at 3 months now, who rode along on my chest, so we stopped at the first campsite upriver, about a half a mile. No one was there, so it was a perfect place to set up. We would take turns watching Reese while the other fished. Reese was hungry by then, so I got the first shift. I found a nice looking run below us, and waded out to try my luck. A Madame X was my choice, as the sun had just started to dip below the rim of the canyon. After about 10 casts, working the pool, I had my first fish. 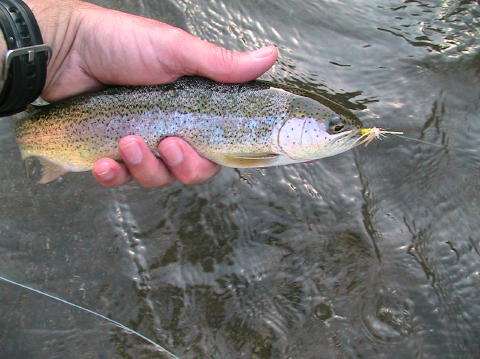 About 12” and torpedo shaped. I landed a couple more from this pool, and my first half hour was up. I headed back to Karen and Reese, and took over for Karen. She headed upstream a short distance, and also found a nice little run. A few casts with the Madame X, and she had her first fish. 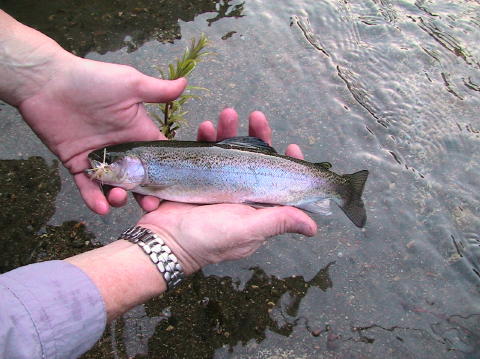 Again about 12”, and fairly thin. Not unhealthy looking, but not the fat hatchery type either. A couple more casts, and she had another on. We traded off about every half hour or so, until about 6 o’clock, when we decided to call it a day. We landed about 10-12 fish between us, nothing bigger than about 12”, but all were wild and very feisty. Most of them launching aerial displays during the battle. Things went so well, we decided to return on Sunday. We followed the same pattern, leaving in the early afternoon, only this time, it was quite apparent that it was indeed a holiday weekend. The lot at the bridge was full. We parked at where Sherman Pass rd hits MTN 99. It was much warmer, in the mid 90’s, but clear and not as hot as I had expected. There were LOTS of swimmers/rafters right at the bridge, and quite a few campers along the shore below the parking lot. We began the hike upriver, and I had warned Karen that we might have to hike further due to the increased crowds. She was okay with that, as we had no problems with Reese on Friday. With luck on our side, the first campsite was again unoccupied, so we decided to fish the same area. Karen fished first, and found it tougher than on Friday. I headed upstream about 1/3 mile on my first shift, and found good water, but had to fish it more quickly than I would have liked. 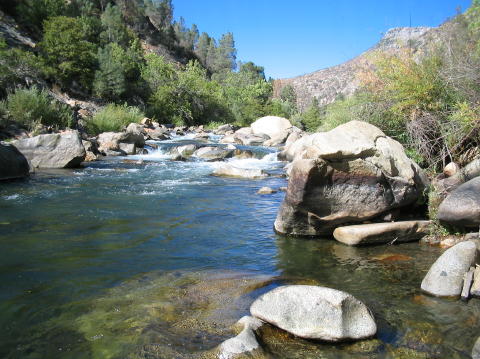 I had a couple of hits, but missed them. I had to get back. After Karen went for her next shift, I decided to fish WITH Reese. So I strapped her up, and headed to my original pool.
img src=http://www.coylesweb.com/ImageExpert/Reese_Goes_Fishin/images/image003.jpg>
Yes, that's Reese strapped to me! A few casts later, Karen came into view being towed downriver by a nice fish. It checked in at just over 14”, the largest of the trip. Reese and I managed to land one fish, about 12”. It was time to go, so we packed up and headed back. After 2 days, and about 3 hours each of actual fishing time, we had landed 15 or so fish, the smallest at about 7’, and the largest (Karen’s) at just over 14”. River flows were optimal, water was quite clear and about 62-64 degrees at 4 o’clock in the afternoon. Sunday was much warmer, topping out at about 95, but after the sun dipped below the canyon rim, was 82 or so by the time we left at 6:30. Most of the crowd on Sunday seemed content to stay near the bridge, although we did see and hear hikers on the way upriver and downriver. We had at least ˝ mile of river to ourselves on Sunday, which was much more than I could have hoped for, given the normal crowds on this big weekend. Matt
PS- I have mad the jump to "the next level" on this fish report- Video. Below is a link to a video I made of this weekends fishing. It's about 2 minutes long, and checks in at 6 mb, so if you have dial up, I don't reccommend it, as it would take a half hour or so to load. But if you have a braodband connection, it will stream in about 20-30 seconds. You'll need Windows Media Player 9, if you have 7, it should ask you if you want to download the appropriate codec. It also has sound, so if you are at work-you've been warned! http://www.coylesweb.com/Video/Reese%20Goes%20Fishin'.wmv