We had a chance to fish the upper river for a couple of hours on Saturday. Due to prior commitments in the morning and evening, we would be violating my #1 rule of summer Kern fishing: Thou shalt not fish between 11:00 AM and 4:00 PM. We got to the river about 2, and settled on a nice looking stretch just above the Golden Trout Resort. Exactly the type of water we look for in the summer: mostly between 1 and 3 feet deep, moving fairly quickly, with boulders and pockets. I did not have high expectations, as we were out in the heat of the day, and this location had nearly no streamside shade/protection. I fished first, and started with a Stimulator, afer having discovered I had no Madame X's in my box. Weather was very warm, probably mid 90's, with a fair amount of breeze blowing up-canyon. I left my thermometer at home, I would guess the water temp was 72-74, very warm. The water was quite clear, there was a slight (very slight) "tinge" to the water, probably from thr swimmers that were about 200 yards upstream of me. I fished a nice seam near the far bank, and came up empty. Ditto the next few riffles/pockets. I switched to a Black Humpy, fished it for a while, and kept shuffling upstream. In one spot, a nice slot that deepened to about 2 1/2 feet, then tumbled over a small ledge, I saw a fish rise to my fly. I was so shocked at his lazy take, that I set the hook far before he even hit the fly. I tried again, and another fish from the same run made a try. I missed him as well, again trying to set the hook before the actual bite. I cast away a few times, not wanting to put the fish down, then came back. This time I was ready, and would not be so quick to strike. I drifted the Humpy past where the fish had struck before, and was rewarded with another strike. This time I waited until he turned to the bottom before tightening my line. Success! I wish I could say that it was a monster, or even large, but at about 10" and quite healthy, I was pleased that I had been able to violate my own "absolute" rule about fishing the Kern, and land a fish on a dry fly at that. That turned out to be the lone fish of the day, Karen striking out completely. I definitely would like to try this section before sunrise, as I'm sure that it would produce quite well. Maybe after Labor Day. So here is a picture, since someone earlier had lamented the lack of pictures. Also a picture of our two "fishfinders": Cinder (Black) and Rocket (Yellow). 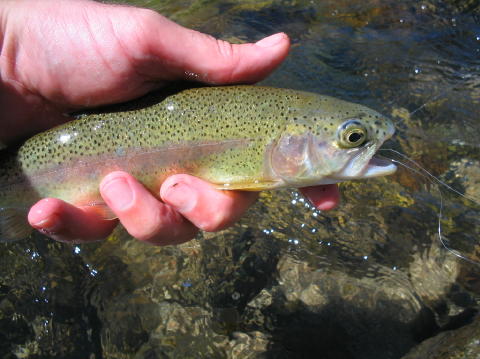 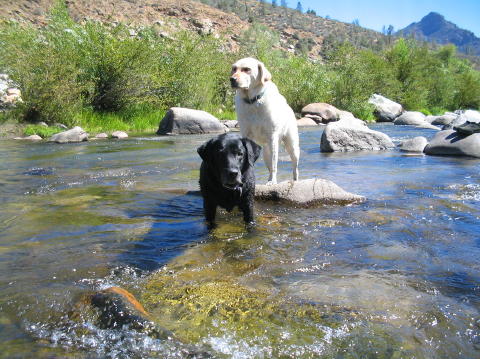