Started out on Saturday at about 2:00PM. Took the spinning gear to continue to get re-acquainted with other methods of fishing. Overcast, upper 50's, and scattered rain had just begun to fall. We went to Halfway, figured somewhere close by was just as good as anywhere. Water clarity is good, but has a "grayish" tint to it, we guess because of ash runoff. Karen and I split up as usual, and immediately had a double hookup. I was using a Panther Martin, and Karen had on a orange Caliber. Both fish were about the same length, 13", but mine was quite a bit thicker. Both good fish for a start. Continued on upstream, and had some occasional success. Karen lost her Caliber, and I switched to a Mepps Black Fury. First cast with the Black Fury, and I landed a nice 14" rainbow. Karen switched to silver Kastmaster and was able to get another nice fish, also about 14". As the rain increased, we continued fishing, altogether landing 8 fish between us in about 1 1/2 hours, I had the smallest of the group at 6 inches, the rest were all between 12-14 inches, and again, all very healthy. All fish were landed either on the swing or just after the lure started upstream. 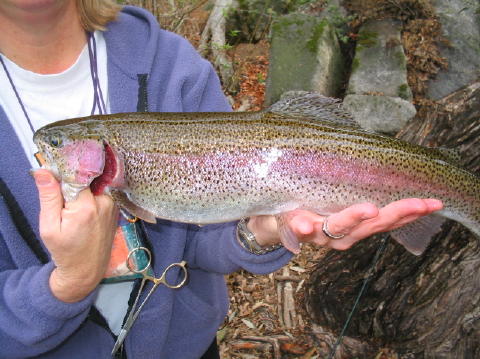 We fished Blackrock Gulch South on the way home on Sunday. Overcast skies, but seemed a bit warmer, maybe low 60's for temps. Water clarity excellent in the lower river, flows above the Borel powerplant are very low, around 100 cfs I'd estimate. We fished a few likely spots but got no action, using spinners (Panther Martin, Black Fury) again. Got a call on the radio from Karen upstream, and ran up to where she was, and she had a nice 14" rainbow. After getting a picture, I headed back to the pool I was working, and made a few casts. I didn't need the radio to hear her next hookup. I ran up to see her struggling with the fish pictured- She originally thought she had a big carp or squawfish on. It was leading her around the pool she hooked it in, and it took off on a short run twice. She brought it in, and was shaking. With no net, I had to reach down quickly to grab it. I held up to measure it- just under 20 inches. Beautiful coloration and spotting, Karen originally wanted to keep it. But she decided that releasing it was probably best. So back into the water while she gently cradled the fish, and when it was ready, glided upstream along the bank, and down into the depths of the pool. Karen had to sit down to compose herself, this was a truly large fish. I would estimate to be between 3 and 3.25 pounds, the largest fish either of us had landed in the Kern. I made a few more efforts to hook a fish, but we needed to get on the road. In about 1 1/2 hours fishing, we landed a total of 2 fish, both Karen's. I did not even have a hit. But anytime you land such a nice fish, I would classify the fishing as pretty good. Matt