We decided to fish the Derby this year, after taking the last couple of years off. I will say upfront, that we have not figured out how to fish Lake Isabella. We took the boat, and we have all the trolling gear- 2 setups with leadcore, and a small portable downrigger. We usually set one line for topwater, the leadcore about 1-1 1/2 colors apart, and the down rigger at the deepest level that we meter fish. This approach has served us well at many of the lakes we have fished in the past. But this set up doesn't seem to do well at Isabella. Saturday we headed out early, the weather looked threatening, clouds building in across the valley as the day wore on. Temps were in the low 60's, and the wind was already blowing about 15-18 knots. We decided that we would stay in the wind shadow of the main dam. So did just about every other boat on the water. There must have been 40-50 boats of every description, from little aluminums like ours, to large pontoon boats, to day cruisers to ofshore center consoles. Even a couple of float tubers near the French Gulch marina . We started our first pass near the Main Dam launch ramp, and Karen hooked up on a THomas Bouyant (red & gold) in about 10 minutes. Those fish are always the big money fish, until you actually land them, and they always turn out not to be. We have a saying- "Catch a fish right away, no fish the rest of the day." And unfortunately, it turned out to be true again. Nothing else at all as we plied the water from the main dam, to French Gulch, turning around and back towards the launch ramp. I really had wanted to get over to Rocky Point and Stine Cove, but the wind just made it way to dangerous. The cold wind took it's toll on us, and we decided to call it a day at about 12:30. Fished for about 5 hours, and had one fish to show for it. Thought that the river might be fun to fish, so we headed in that direction. Stopped at the cemetary, an managed to get one fish. aboput 12" and fat, on a Panther Martin spinner. Headed further up, and stopped at Halfway, we've always been able to get good fishing here on dry fly as well as spinners. I broke out the flyrod, Karen with the spinner, we fished for about an hour with no luck. I fished a Royal Wulff wet, and a couple of different Wooly buggers. On our way back up to the cabin, it started to snow at about 4500 feet. This is what we woke up to Sunday morning. 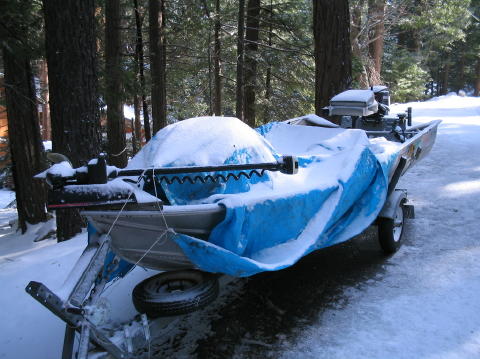 It was 28 degrees and there was an inch of snow on the ground. After "digging out", we headed down to the lake. Windy again, but did not seem as bad as Sat. I figured we coulc launch at the auxillary dam and "hide" in the South Fork area. We trolled up and down, occasionally landing fairly large crappie (near the South Fork Marina and Paradise Cove) and then landing a couple of trout in the area where the bank is very "bouldery", I don't know the name of this area, between the aux campground and the next unnamed campground, but a couple of fish before the wind got to heavy wasn't too bad. My overall impression was that people were doing better on Saturday than Sunday, we saw lots of fish being landed in the main dam/French Gulch area, and most boats had a stringer or basket of fish in the water. We did not see anybody land a fish in the South Fork side on Sunday, but we certainly did better. There also did not seem to be as many boats out on Sunday, The wind seemed to blow just as hard both days. I imagine that after most of the working folks have gone back to work today, the fishing will probably explode. Matt