Headed to the Upper River on Sat. Weather was perfect- low 80's, a few puffy clouds, no wind. We decided to take out the spinning gear, as the flyfishing would seem to be a futile effort due to the water clarity. Water is improving, although only slightly. Lots of mud on the banks. We started at the cemetary, the large hole just below the parking area is completly filled in with silt/sand/mud. Water clarity was not as good as I'd hoped, visibility was about a foot. We started off with spinners downstream of the parking area, and worked our way up. The river here is now wide shallow and slow moving. We worked upstream, and I landed a nice 13" fish below a riffle. Karen kept moving upstream, I stuck around and continued to fish this riffle. I switched lures every 10 minutes or so, trying to get an idea of what worked the best. I got hit on a Bikini Needlefish, and a black Mepps spinner, Karen fished a Panther Martin with no luck. Silver seemed to work better than gold. After about an hour and a half, we decided to head upstream. Stopped at Halfway, and within about 15 minutes had another nice fish, just under 14". Working upstream, we were able to land another 4 fish, none under 12", and the nicest one (Karen's) at just over 14". The fish all looked extremely healthy, good coloring and excellent girth. These fish were not starving. If these were hatchery fish, they were the best examples of hatchery fish I have ever seen. 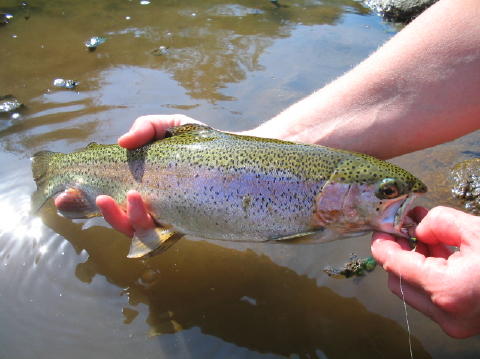 We fished the lower river on the way home, at Black Rock South, just upstream from the Borel Power Plant.
Again, good weather, clouding up some, and in the 80's. If the trash on the upper river offends you, it's just as bad down here. We gradually moved downriver from where we parked, again throwing spinners, Karen with the Panther Martin, I used the black Mepps. We landed a few small (6-8") smallmouths, Karen much more consistently than I. So I switched lures quite a bit, but again had only minimal success. Karen stuck with the Panther Martin, and landed a few small trout to go with the smallies. On our way back up, she got a 12" squawfish, I jokingly refered to it as her having gotten the Lower Kern Slam- Trout, Smallie, and Squawfish. We were back at our original starting point, and Karen hooked into the fish pictured above. Took her downstream on a nice run, and we couldn't believe the size of it when she got it in. From the tip of her fingers to her elbow, about 16 1/2 inches, excellent coloring and pretty thick. Also a fish not starving. I had one more shot at a nice rainbow, I had slung my spinner under a low hanging branch into a nice riffle, and got the fish I knew was there to hit, but as he took off downstream peeling line from my reel, he made a quick loop around the branch hanging in the water, and broke me off. I got a look at him, and although not as big as Karen's, he was in the 14" range. So after a couple of relatively short days on the water, we landed about 20 fish between us, about 10 rainbows from 6- 16.5", about as many 6-8" smallmouth, and the one squawfish. On the upper river, it seemed that the larger, flashier silver lures worked better, while downsizing, and going gold in the lower river seemed to work better. I did not see any fish rise on the upper river, and visibility was definitely restricted. We saw several fish rise in the lower section, and the visibility in the lower river above the power plant was good, pretty close to what it normally is. We were shocked at the size of the fish we landed over the weekend, especially on the lower. We have not fished the lower in a few years, but I think we will have to add it to our list. Matt