We decided to head to The Forks on Sat. This pic is looking upstream from the spot where rafters normally launch at the confluence of the Little Kern and the North Fork. We figured that maybe the water was a little clearer upstream, and even if it wasn't we could fish the Little Kern. Several others had the same idea. We ran into a guy coming back up, and he said the river was still muddy, and he fished the Littke Kern, without much success. He said he had a few hits, but that was all. We continued down, and figured that the main Kern was not a possibility. The Little Kern was sparkling clear and cool. Flow was fairly low, but seemed fishable. The banks did have some dried mud, and the rocks near the shore were coated in a fine silt. We fished the Little Kern for a couple of hours, and only had a couple of small fish to show for it. Saw a few others fishing, and they had the same results. We decided to try where the Kern and Little Kern join, maybe the clear water of the Little Kern would influence the fish near the confluence. 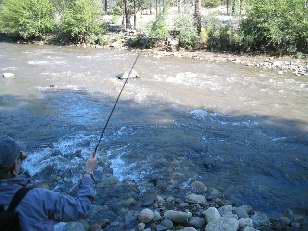 If you look closely at the pic, you can see that the clear water of the Little Kern had absolutely NO effect on the Kern. Well, maybe a clear ribbon about a foot wide, a foot from the riverbank, downstream for about 30 ft. Karen made a few casts, but it was essentially non-fishable. Visibility was probably less than 6". Overall, the Little Kern was not as productive as we had hopped, but I'm sure it has been hemmered pretty hard in the last few weeks. Main Kern remains basically un-(fly)fishable. Matt