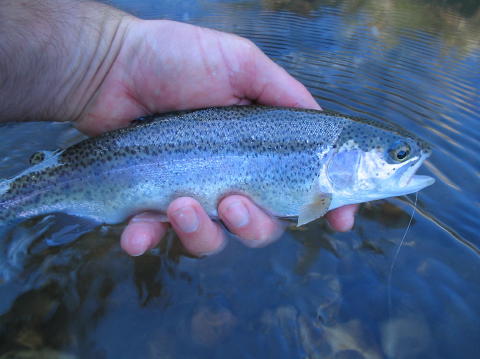 Fished above the Johnsondale Bridge on Saturday. Hot (upper 90's, low 100's) and fairly humid. Some cloud development along the eastern ridges, but no rain. The river was still significantly off-color, visibility was about 2-3 feet. Parking at the bridge lot was unavailable, so we parked at the corner of Mtn 99 and Sherman Pass Rd. Lots of river users at the bridge, a rope swing tied to the old bridge was being used, and there were several large groups swimming in the immediate area. Hiked upstream for about 40 minutes, we stopped about 1/3 mile below where Dry Meadow Creek enters the Kern. I had a fish after about 10 minutes on a BH Prince, striped back in very fast. In fact, I was reeling up to try another fly when it hit. Karen was using a BH Hare's ear and was getting nothing. I moved upstream to get at a nice riffle that I have caught many fish from in the past, and switched to a Royal Wulff. The water was in deep shadow, as it was now about 5:30. Fished some slack water below the riffle and got a nice one (pictured, about 12") on a very lazy take. He just slowly arched his back and sipped the Wulff. Karen switched to a Royal Wulff also, and began getting hit right away. She also landed a nice one, about 12" as well. I continued on upriver, tied on a Madame X and fished the tailout of the large pool below the falls from the west side of the river. I got 2 (8-10") on the Madame X, then switched to the east side, looking to fish the pillow in front of a large boulder. As I prepared to cast, I heard a splash behind me. A fish had hit at my fly. I turned and cast back to the slack water, and he hit again. I didn't hook him so I tried again. Hit again, no connection. I cast again, same thing. I cast about 6-8 more times, he hit every time, but I couldn't hook him. I was a little frustrated at not being able to hook him, and I wanted to try the falls so I moved on. I made a few casts around the falls area, but had no takers. The sky was beginning to darken, and we decided to head back at about 7:30. We landed 8-10 fish between us, from 6-12", on a variety of patterns. Royal Wulff, BH Prince, Madame X, and Black Widow got results. Adams and Grey Hackle Peac0ck did not. Fishing was a little better than I had anticipated due to the color of the water, as the water continues to clear, I'm sure will only get better. Matt