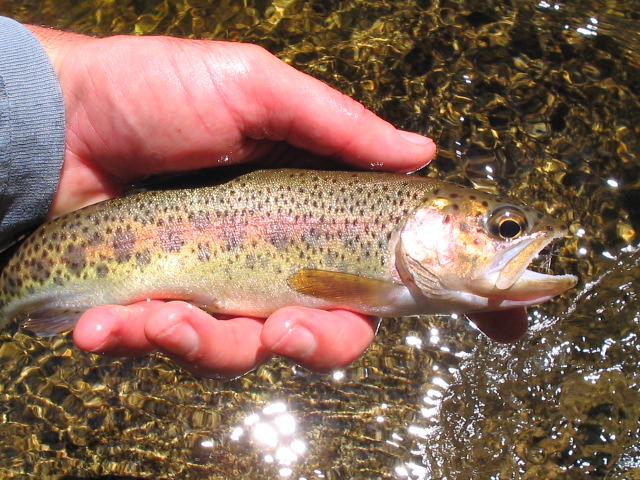 We fished Dry Meadow Creek on Sat. Weather was warm, upper 80's to low 90's, not a cloud in the sky. The water was cold and clear, and running at a good level, similar to Salmon Creek last weekend. Lots of bugs-Mosquitos, gnats, and some kind of biting horsefly. Hit the water at about noon and were getting action right away. Karen with the Griffith's Gnat, and me with a Grey Hackle Peac0ck. Most fish were small, about 5-6", the colors on them were quite different than at Salmon Creek. Very pale green on the backs, fading to a bright silver along the flanks. We continued to fish along downstream towards the Kern. Karen found a nice pool, and tied on a BH Hare's ear in olive, and hooked up with a large fish, but he broke her off after about 20 seconds. I was downstream at the time, and got her exited report over the radio. 2 minutes later, she calls back "I've got him again!" She landed him this time, and measured-13.5". In a creek about 5 ft across and mostly under a foot deep. She said it was the biggest fish she has caught on her 3 wt. About 10 minutes later, I found a nice granite bowl, had to work my way down to it, across some boulders and downed trees. I also tied on a BH Hare's ear, and flipped it into the cascading water at the head of the pool. I let it slide downstream, then gave it a little action, and slowly stripped it back in. Then the tug came- I thought it was stuck on the lip ot the "falls" tumbling into the pool- until it started peeling line off my reel downstream. He then made an abrupt turn to the left and I started to reel him in. I got him up and called out to Karen on the radio "He's huge!" I reached down to pick him up while getting out the camera. Trying to get a shot, he was able to wriggle out of my hand before I could get the picture. He was 13" long, torpedo shaped, and SILVER. He looked like a steelehead, light green on the back, and CHROME on the sides. The slightly smaller twin to Karen's. Unfortuantely, no pictures of either. We continued to fish for another couple of hours, and landed a number of smaller fish, mostly between 6-8 inches, there were a few more bigger ones, up to about 10.5", but no more 13's. I had wanted to come to this creek to check out the Seven Teacups, people actually kayak down these waterfalls before it hits the Kern. Check out the link below for pictures of these crazies. I hiked up above the series of falls, and there were in fact some Kayakers scouting the falls. These are seven falls with a drop of between 8-22 FEET. I didn't actually see them go, I had to get back. For about 3 hours fishing, we landed about 25 fish between us, about half were less than 9", but there were enough 10" plus fish to make it very interesting.
We decided on Sunday morning to fish the upper reaches of Bull Run Creek. Again it was in the upper 80's and buggy. In the past, people have asked me if you can get down there in a 2wd vehicle. The road seems much rougher than in the past, and I would have to say that 4wd is probably necessary. A small pickup or Jeep would be the bet bet, the road is pretty narrow, a full size truck would probably come out with some "desert pinstriping". Parked at the end of the road and began the hike. We stopped at a large pool and waterfall on Cow Creek, where we had seen a huge (20") brown two years ago, but only could hook a few small fish. We continued on to Bull Run. Karen went upstream from where the trail meets the water, I went downstream. I tied on a Grey Hackle Peac0ck, and Karen did the same (why mess with success?). The first fish I landed, was the largest of the trip, 9.5" (the fish in the photo). Once again, the colors on these wild fish are truly amazing. Karen spent her time at a pool near a small waterfall, basking in the shade and hooking as fish on nearly every cast. All were between 5-8". I bushwhacked and rock hopped my way downstream, catching fish on the Grey Hackle Peac0ck, BH Hare's Ear, and a Madame X. We landed about 40 fish between us, none bigger than the one pictured at 9.5" The hike out took less than I remembered-38 minutes. Then the bumpy ride out. There are several large pool that I was unable to get to, and I know there are big fish there. Bushwhacking below the confluence of Cow and Bull Run could get you into some serious fish. Maybe this summer we will set up camp down there for a couple of days and see what we can get into. Matt